True story. It happened as I was going into the city by bus to pick up my daughter for the trip to the Frankfurt Book Fair. My reaction came in the same tone, asking the man, where I was supposed to go. Meanwhile I know, what elderly man has been: a “Bewohner” – an inhabitant

Did I intrigue you, what this story has to do with a culture blog? Do you know, what “Bewohner” are? If not: Shall I tell you?

A “Bewohner” free life is the better life

The task, to explain that “Bewohner” thing to you, should actually be given to someone else. His name is Tobias Beck. He isn’t actually a writer, he’s a speaker. A motivational trainer. And he’s a sympathetic guy. Maybe because he knows how to deal with a “Bewohner”.

Again that word. Well, I’ll give you the concept of “Bewohner” in short. I’ll use the German term “Bewohner” from here on as a kind of name.

“Bewohner” are that kind of homo sapiens, you don’t want to have around you. Except you’re yourself a “Bewohner”. To a “Bewohner” the sky is to blue, the sun to bright, the night to dark. They even complain about the hole in the donut even though that hole is an integral part of the dough ring. Without it it wouldn’t be a ring at all. And according to legend it is the hole, the gave the donut its name. A donut is some dough with nought in the middle. It’s dough nought. And because people are lazy with talking someday the dough nougth became the Donut. If I remember the tale right…

“Bewohner” are those people who shout at you, if you can’t make more space than available out of simple physical reasons. And the worst thing: They are contagious. It’s easier to pull someone down that to lift him up. Gravity is aiding you.

But what am I talking? This is absolutely not my part. Tobias Beck should take that part. He simply can do it better. So I beg you to go into the next book store an ask (if it’s available in your country) for his book:

I’m not the kind of reader of life consulting literature. I wouldn’t follow them anyway, because I believe to have my own personal way of life. How can a stranger tell, how my way should look like, if he doesn’t know me?

Most consultant books seem to go the way of “Do this, do that and you’ll have success, success, success…” According to those book at least half of mankind should be as rich as Bill Gates. Rich of material goods.

How often have I been told to write a book, to put my texts onto paper an sell them? My answer had always been “No.” Maybe the answer is irrational. Maybe I wouldn’t have to go to the office every morning if I had published a book. But this isn’t my way. Tobias Beck understood it without knowing me.

I am writing for writing’s sake, not for fame and money. The way is the destination. Would I give up my office job? I sometimes think about, how this would be. These are the days when it feels like I have done a lot but achieved nothing. Then unexpectedly something happens, that shows why I am doing my job, that hab part in something.

Tobias Beck is talking about a car part manufacturer in this context. The employees had lost all their illusions about their job. They didn’t come to company parties etc. They were “just making breaks”. Until Tobias gave them the opportunity to drive sports cars. Then they knew, what they’re doing is part of a f**king racing car.

Such stories are the secret of the book. No thick tome about cosmic energies. No esoteric humblemumble, no high psychology.

Tobias Beck is a speaker and the book is written in exactly this tone. When I closed my eyes to the surrounding world while reading “Unbox Your Life”, it felt as if I wouldn’t read a book but Tobias stands before me on the stage and talks to me. He tells stories out of his own life, explains shortly but not to deeply the scientific background and thus abstracts the Story to the reality.

And he sticks to the important things. The message is clear and simple and needs just 137 pages – including the thanks.

At the end I had a consultant book, that’s been read rapidly. A book, I will not follow in every detail. But it explains a lot. Now I understand even the car drivers, who are honking after two seconds of green light, when I don’t manage to in the gear that fast. They are “Bewohner” and in the end there’s only one way to deal with them: Evade them!

And if meeting a “Bewohner” is not avoidable, shorten that meeting. Tobias has a great phrase to do this: “I am not available for this talk.”

Of course I would not dare to steal his catch phrase. One doesn’t do that. But the next time, a “Bewohner” is nagging because I am not giving more space than is available, I might answer: “The amount of energy, that’s needed to dissolve the matter of my body and put it into a state, that allows me to shift through the seat, is about 6.3 trillion exajoule. That amount of energy I cannot afford and to produce that energy with the means known to us would damage the environment in a way, that life on earth would be impossable. Because I’m not ready to do so, I have to stick to Newton’s mechanical laws.”

Yes, sometimes the left part of my brain dominates. But that’s okay, for thus I notice, that enraging about all (especially “Bewohner”) lacks logic.

And if you stay away from “Bewohner” and keep the one or the other counsel of the book in mind, I believe you can become a diamond – if not even a super star. But to achieve that, you have to be fine with yourself. A good start isn’t difficult. Just smile. Give a smile to somebody. Give a smile even to yourself, when your lokking into the mirror. If the universe work on resonance, you soon experience the consequence of your smile.

The only thing, I didn’t find out, is why Tobias Beck chose the name “Bewohner” – inhabitant. The book doesn’t explain this. But is it important? I’d say no. It’s important to know, what “Bewohner” are, and to give them no forum.

Instictivly I knew all that. But thanks to Tobias Beck I now know why.

And… Tobi (May I call you Tobi?), I have a gift for you. A little solace for the photo a the seagull, you could not take at your cruise because of that “Bewohner”: 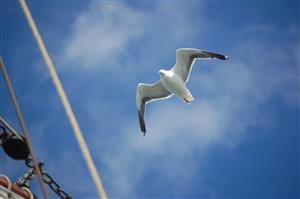